Recap of the SDBAA Awards (with winners and links)

Last week, the San Diego Book Awards Association presented their awards at the Sheraton in La Jolla. There were no SDBAA awards given out last year, due to the passing of Chet Cunningham, so this year books were accepted from 2016 and 2017, and needless to say, the competition for top honors was very fierce...
I was there, breath held and fingers crossed for Eric Peterson's The Dining Car to win the top award in the Contemporary Fiction category, which it did! Congratulations, Eric, on your second gold medal for this delectable, rollicking book. 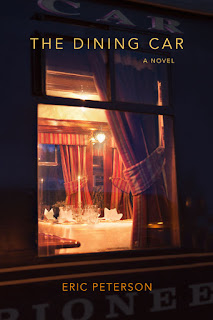 Two of my other clients had books nominated in the category of Published Young Adult Fiction— Dragon Camp by Cate Shepherd, and Paco Jones by Dominic Carrillo. I applauded loudly for both of them, but Paco Jones won!
But even before that, it was a very fun night, with plenty to applaud as we celebrated literary excellence in San Diego.
The General Fiction category was way too close to tell with Where I Lost Her by T. Greenwood, Casualties by Elizabeth Marro, and Gifts Unexpected by T.C. Grant. The winner was Where I Lost Her by T. Greenwood.
Judy Reeves was nominated for her newest book, Wild Women, Wild Voices and I saw that inspiring "Wild Woman" herself at the awards.
Her books' competition was a beautiful, photo-rich book by my friend Nicholas Clapp published by my long-time pals at Sunbelt Publications. Nick's beautiful book won, which was nice, but comparing the two books is like comparing apples to oranges.
Friends John Van Roekel and Indy Quillen were both nominated for their most recent works and it was nice to see them there.
The winner of the "Best of the Best" for the night, aka, the Theodor S. Geisel Award was Take a Hike by Priscilla Lister. Lots of photos of the big night are here.
There are many categories in the SDBAA awards, from local interest to military/political—there's always something for everyone from our local authors.
Click here to see the full list of winners.
Posted by Jennifer Silva Redmond at Thursday, June 15, 2017 2 comments: