I’m up a river (specifically, the Sacramento), without a paddle—of course I don’t have a paddle, we live on a sailboat. Anyway, I realize I have been a bit out of touch the last couple of months (haven’t we all?) but now it is time for my Top Five Books of 2020 list.

As always, I am not writing about books I edited, so I won’t be including Murder Bytes, the newest smart, lively thriller by Gayle Carline or the oh-so-readable Angel Flight by R.D. Kardon. And I don’t promote those titles you already know, I try to focus on books from smaller presses—you might never have heard of these five, if not for this post, and I don’t want you to miss them. Not all of these were published in 2020, but close enough (I didn’t include The Vanishing Woman from 2012, though it should be required reading).
In no particular order, here they are:

The Last Blue by Isla Morley (2020) This book absolutely transported me. Not always to somewhere comfortable, but the world she created felt so true and was so visually compelling that I felt I was watching the story play out all around me. Set in a tiny town in the Appalachian Mountains in the 1970s, with long flashbacks to the 1930s, Morley’s novel is about prejudice and skin color, but not at all in the way you might think. 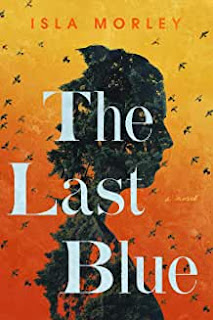 Murderabilia (2019) by Carl Vonderau. Think dark. Think creepy. Think chilling. Even after all that, you won’t be anywhere near this work of fiction with all too many real-life resonances. The protagonist is a wealthy banker who’s also the son of a renowned serial killer; now he himself is wanted for a grisly murder. The only way for him to escape prison (maybe even death) is to find out whodunnit, with the help of guess who? It'll be hard to find, but you may see a used copy.

Crux: A Cross-Border Memoir (2018) by Jean Guerrero. An award-winning reporter with years of experience covering Latin America, Guerrero is a true child of the cross-border experience. Born in San Diego, she’s the product of a tumultuous marriage between her Puerto Rican mother and Mexican father. Somehow, she managed to draw me in and make her life and her crazy family feel just like my own.

First Second Coming (2020) by Jeff Pollak. First off, God (or NTG as he likes to be called, short for New Testament God) is retiring. The replacement deity was hired by Milky Way Galaxy, Inc, because he’s a pro at bringing planets back from the brink. He threatens to eliminate Earth’s biggest problem, humanity, if they can’t rise to the challenge he poses to them on a popular news broadcast. There’s a love story, too, between two of the news anchors, and plenty of thoughtful laughs. Oh, and there's gonna be a sequel.

Past This Point (2019) by Nicole Mabry. Oddly enough, this book is the one that feels the most like 2020, and it was published last year—in August of 2019, before the world changed forever. The tale of a young woman desperate to avoid catching a killer new strain of flu who ends up trapped in her NYC apartment as the dead pile up and the government cracks down, was gripping and ultimately quite moving; the writing wasn’t fast paced, but its honesty kept me turning pages.

(Another wonderfully prescient novel for 2020 is the dystopian Midnight in New California by Lisa Renee Julien, though it’s is not as well written or edited as Past This Point.)

Hope you can find one of these you love, and want to share with others. And I hope you have a quiet, calm, restful holiday. Next year will be here soon, with more books...