Every now and then, you read a novel and it reminds you of why you fell in love with literature, and why you still think that reading and writing can save us, unite us, heal us. Such a novel is My Last Continent by Midge Raymond. It's about a strong woman who already loves two things very deeply, and then falls in love for the first time with a person.
Much has been written about this justly-acclaimed book—about how Raymond brings to life the loveable endangered penguins and the starkly beautiful threatened continent itself—that I’ll simply say that I feel like I lived through this adventure and barely escaped the shipwreck myself. I read far into the wee hours of the morning (fair warning to future readers) and even in the record-breaking heat of this August in So Cal, I read the final chapters with a shiver or two, and more than one tear.
Raymond opens the book with the word “Afterwards” and the first lines put us right into Antarctica today; our narrator notices that the tourists waddling up from the shore to the penguin colonies are swaddled so that “these visitors—stuffed into oversize puffy red parkas—walk like the penguins themselves.” Moments later we learn about the shipwreck of the Australis, and we are hooked. 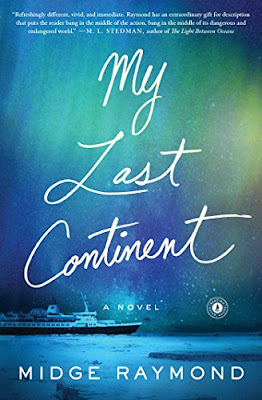 Having lived aboard a boat for most of my last thirty years, I can attest to how well the author captured being at sea for long periods, what it's like to be in a small inflatable dinghy in the dark/cold, and how difficult small boats are to control in choppy water. Luckily I've never been in (or on) such a cold ocean—reading about it was chilling enough...
Openings are notoriously difficult, and only a few writers are able to make page one look easy. Every book has its own, perfect beginning—it is the author’s responsibility (and sometimes the editor’s job) to find it.
You all know I love reading memoirs, and that traveling on land and sea in Baja California was a defining part of my life. Here are the opening paragraphs to two excellent, and very different, Baja memoirs:

From Almost An Island by Bruce Berger: “Looking back on a three-decade obsession with Baja California, I see that I have been caught by a cul-de-sac. Longer than Florida, longer than Italy, Baja California is an eight hundred-mile deadend. To the west, the Pacific Ocean stretches a third of the globe's circumference before striking another continent. To the east lies the Gulf of California—more romantically known, particularly to the travel industry, as the Sea of Cortez. A finger of the Pacific, the Gulf is a peninsula of water to complement the one of land.”

From Miraculous Air by C.M. Mayo: “The first airplane arrived at San José del Cabo in 1931. The people couldn't believe it, that this thing could stay up above the earth, swoop over them without falling. The pilot's surname was Flores, but no one remembers his first name.
It is the town historian, Don Fernando Cota, who is telling me this story. It is late October, more than sixty years later. Most of the people who were there that day are dead.”

One excerpt is a bit shorter than the other, but that is the least of their differences. Each establishes a clear tone and a unique voice, but both make me want to read more. I bet you all have one or more favorite opening line(s) to a book—please share them with us below.