We are currently (Summer 2022) cruising around the Puget Sound and the San Juan Islands of Washington after two seasons in SF Bay Area and the Sacramento Delta.

Enjoyed sailing (mostly motoring around the sloughs of the San Joaquin and Sacramento Rivers. What a treat to have the boat in fresh water (brackish in some places) for the first time. Bottom cleaning was reduced to once every six months, and the zincs have all lasted six months or more. It was a shock to experience the "Delta Breeze" first hand when it started blowing, and blowing, and blowing. Even the 100 degree plus weather was liveable with so much wind daily,  and our new Mantus Anchor helped us sleep soundly even when the wind was hooting and gusting to 25 or 30 knots and/or waltzing at anchor due to multiple daily current changes. Our Spectra watermaker loved making fresh water out of brackish water, too. 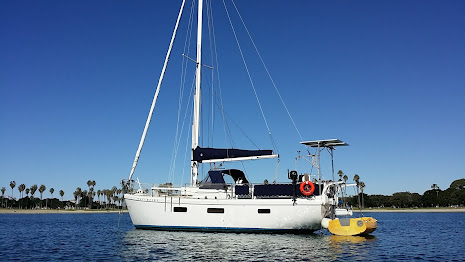 For those of a nautical bent, here's a little about our home sweet home..."Watchfire 2" is a Coronado 35 (foot) sloop, currently moored on the coast of California. We bought her in 2004, and have spent years making her our "ideal custom home." (I say "we" though Capt'n Russel did a majority of the customizing and vessel renovations.)
Our first boat was a Columbia 26, which we took from San Diego to Baja in November of 1989, sailed around the Sea of Cortez for a year, took down the coast of Mexico and into Central America, and through the Panama Canal, then sailed to Florida...We sailed back via the ICWW along the gorgeous Gulf Coast to Texas, and hauled her back to San Diego in May of 1992.
Our second voyage was in 1996, and consisted of a trip down the Baja peninsula in June, a couple years in paradise (Sea of Cortez) and over to San Carlos/Guaymas in 1999.
We trucked "Watchfire" back to California in 2003, where we parked it (on its trailer) on a dear friend's property in the San Diego backcountry, where we were living on it and fixing it up to sell. The Cedar fire got to it first, and it got a "Viking Funeral" on October 26, 2003.
We bought the new boat ("Watchfire 2") in August of 2004 (through an ad in the paper!) in Newport Beach, and sailed it down to San Diego, where we stayed for many years, mostly sailing only to the boatyard and back, where we painted the boat with Pro-line paint, of course..
Items we kept: The hull, the mast (with some work), and the lovely blue-gray upholstery.
Things we bought and added: A Beta Marine 30hp engine (in 2016, see below), a Portland Pudgy Dinghy, a main and a roller-furling jib from North Sails, a 45 pound CQR, new rigging from POR, Kyocera solar panels from Northern Arizona Wind and Sun, Raymarine Autohelm, Spectra Watermaker, Orca Green Marine LED nav lights, and electronics...
What we completely re-did: Everything else. Seriously. Well, Russel did most of it, but I helped when/where I could. AND I kept "house", cooked, and worked for all the years while the renovation happened around me.Recently, we've been renovating the boat once again—since 2016. More stuff we added: A brand new Beta Marine 30hp diesel engine, new propellor and shaft; all new rigging; and Russel created and installed a stainless steel arch for our dodger cover, plus custom-built wooden rubrails to replace the weak, terrible-looking (and sometimes leaky) Coronado/Columbia rubber rub rails. Also, a Garmin 8616 Chartplotter with radar, AIS, and forward-looking sonar with thru-hull Panoptic sensor.
Voyages in 2011, 2013, 2014: We cruised up the California coast in 2011 to Santa Barbara; to Morro Bay in 2013, and in 2014, as far north as Monterey...Stayed a month there and another month in our favorite little town: Morro Bay—we took it slow both up and down, staying in Santa Barbara a week, and Santa Cruz Island and the other islands only briefly. I loved Santa Barbara, Cojo, and Ventura.
Latest voyage, 2020: In spite of the Coronavirus pandemic we are cruising up the coast. Hoping to get to SF in 2020, and then cruise around the Bay Area for a while. We plan to head up to Washington and the Gulf Islands of British Columbia, Canada in 2022.