A Wild, Wet, and Windy Spring—and Some Writing News!

The big move happened and our boat is now in Washington State. There was much drama with the lead up to the trucking (so much to do!); the hauling and trucking itself (not enough to do!); and the boatyard and launching and refitting (so much to do!), but Watchfire is back in the water again. The other day, I celebrated Easter Sunday at the top of the mast, since it was the only sunny day (it has been raining A LOT) of the week.

There's still a long list of tasks to complete and both of us are busy with work every day, so the list has to be attacked in a desultory manner. But we have now begun to believe that we will actually be exploring the cays, bays and waterways of Puget Sound this summer! 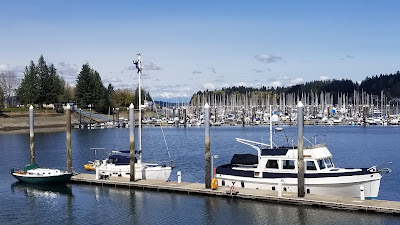 Me at the top of the mast, Russel mans the winch and the camera
Meanwhile, back in March, we had an essay published in the San Diego Union-Tribune, which was pretty cool. My friend Kara also published a piece in the very same opinion section on the very same day, both thanks to my amiga Laura Castaneda, and that is really good too, so check them both out.
Kara and I have been in the same writer's group for about ten years now and someone is always publishing something. The brilliant editor Laurie Gibson is working on a very cool rock-and-roll novel set in London, entrepreneur Carol Burt is working on her years-in-the-making memoir—just like me!—and graphic designer/writer Kara is working on some humorous short pieces while working on their new ranch-in-the-city and a child (she and hubby Mark are expecting in May).
But the biggest news this week from our writer's group is that the other two members, Lisa Gulick and Maria Groschup-Black, have taken over the reins at Sunbelt Publications. If you don't know Sunbelt, then click on this link right now and see their books and a lot more. If you are interested in Nature, Baja, Deserts, Flora and fauna, Hiking, Biking, California (and Baja) History and Natural History, or Native American Culture and Heritage, among other subjects, then Sunbelt has something for you.
You may know that I worked at Sunbelt for over a decade and I still love their history, their books, their ability to help small publishers get out in the world, and their overall mission. I truly believe that the company has an important place in the world of California book publishing and distribution. I wish Lisa and Maria and the whole family at Sunbelt a hearty felicidades and wish them all the best of luck in this transition.
Stay tuned for more pics of the Pacific Northwest this summer.
hasta pronto!

Writers: What are You Giving Yourself for Valentine's Day? How about SCWC?

Yes, it's February 4 and that means only two weeks until the Southern California Writers Conference begins in San Diego (on Friday, Feb 18).  I always look forward to this conference with great expectations, and that is even more true this time, as I prepare to teach a new series of workshops on writing nonfiction.

This year, we are at a new-to-us hotel (the Marriott Mission Valley) which looks fabulous, and after all, this is San Diego, so it no doubt will be fabulous. I know I've said all this before, but bear with me as I remind you of a few reason to attend SCWC:

1. To find your “tribe.” The key reason that this conference changed my writing life—we all need people in our life that "get" us and our writing...You will have plenty of opportunities to find those folks who resonate with you, and vice-versa, at SCWC.

2. To meet industry professionals. Where else can you chat with agents and editors and successful authors in an informal setting like coffee or drinks? At too many conferences all the pros and workshop leaders hang out together and you never actually meet anyone except other first-timers.

3. To get eyes on your work. Your manuscript isn’t necessarily done just because you are tired of working on it. Whether you take pages to read and critique meetings or go to late night “rogues” (or early ones like mine at 7am Sunday) you'll learn what works—and what doesn't.

4. To learn more about craft and story in hands-on workshops like my three new classes, and to learn what's new in the industry. From workshops on publishing, marketing, & promotion for your published book, to great speakers who have a wealth of experience to share with you.

5. Because it's fun! We all need to get out and meet other writers and socialize once in a while. And who doesn't want to hang out with a talented, inspiring, upbeat group of creative souls? So, show yourself some love and take yourself to SCWC—your work is worth it and so are you!

Don’t wait to register; I hope to see you there—hasta pronto!

Bloat, or The Power of the Shaggy Dog Story

I recently watched “The Power of the Dog” and could not believe I was watching the same movie that had been touted and lauded for so many weeks. The acting was fine, and the cinematography was beautiful, but the film's pace was glacial. The script was somewhat intriguing, but so spare as far as the actual story that it could have been the plot of a short subject, maybe thirty minutes in length. As a feature film, it was tedious.

Over the last few years, I have noticed something similar creeping into much of our visual and written arts. I think it may have started with Netflix, which is why it was dubbed “Netflix Bloat.” This awful tendency is, simply, the desire to stretch things into a longer format than their inherent story demands. TV shows are fattened up into endless miniseries, and single films are sold as the first installment in a series—to be written, if there is any demand, very soon.

Of course, I am aware that this change was driven by money. The success of franchises drives Hollywood, I get that. Obviously the LOTR trilogy was amazing in its multiple film form, and some long TV series are wonderful—I am as guilty of binge-watching “Downtown Abbey” as the next PBS devotee, but those exceptions only prove the rule. Most series episodes are fattened up with long minutes, and even whole episodes, of what can only be called “filler,” with the characters talking about things that don’t reveal anything new about themselves, or further the plot in any way.

Once upon a time, writers wrote to be serialized over a period of weeks or months, in popular magazines that paid by the word. The result was often quite enjoyable, in the hands of a master of prose like Charles Dickens, but Bleak House has a fairly limited readership today—actually, it is probably being developed as a not-very-limited series as I type these words.

Not surprisingly, we editors have been in agreement, over the years, that less is usually more. When rewriting, we attempt to always “omit useless words,” as the quote goes. Editing is about cutting the chaff and keeping the wheat, as well as taking out the colorful but pointless tangents that take readers nowhere.

But then someone told an author that “to sell well, you need a series,” and every writer took that as marching orders. If they had an idea for a book, they assumed it could be turned into a series. And so stories that had a fairly simple story arc, that could easily be told in one book, become a series of three or four or even five volumes. Next, authors will be paying editors to expand their word counts and suggest tangents.

Bottom line: More is not always better, and quantity is not the same as quality; readers will recommend your one or two books if they contain compelling stories. Period.