My One Book Recommendation for the Year: "Cradles of the Reich"

I like to do a wrap-up of my "Top 5" books each year, but this year I struggled to find enough books I was passionate about. I kept making lists and deleting them, then starting over— only one book kept making the list, and I never got to five. So I am going to devote this final blog post of 2022 to the one novel that I read this year that I think you (all of you!) really should read.

As usual, I am not going to choose any of the books I edited this year, though you just might want to check out Gayle Carline's new historical-romantic-fantasy-with-dragons- and-pirates trilogy that starts with Blood Dragon Rising.

I am not going to choose a book that you've already seen over and over in every 2022 Top Ten Books List, nor any book from the Big Five Publishers. I am all about supporting indie publishers, such as Sourcebooks, and their Landmark imprint.

The one book I am recommending that you read is Cradles of the Reich by Jennifer Coburn. 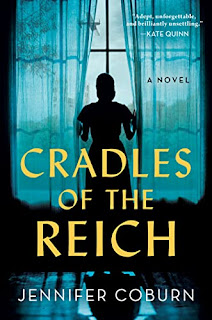 Some literary works are blessed to be brought into the world at exactly the right
time; Cradles of the Reich is one such work. This is a novel that completely captures the zeitgeist of a crucial time in human history, by focusing on a very specific slice of life. The lives of three very different women, in this case, who are all are caught up within the machinery of a fascist regime.

The historical era is World War II, and the setting is Heim Hochland maternity home in Bavaria, the headquarters of the Lebensborn project—a Nazi "breeding program" that was designed to create a so-called master race. The echoes of A Handmaid's Tale are plentiful, but this project was truly stranger than fiction, and our ignorance of it is both shocking and dangerous.

Though Cradles of the Reich is not the first book written by Jennifer Coburn, I believe that it is the novel she was born to write. Not only because few authors would have done such excellent research, or cared so deeply about bringing this horrific story to light, but because few people could have crafted such a compelling story, allowing us three all-too human windows into this repellant reality.

What makes this book particularly impressive to this editor/reader is the author's sure hand with expository. For example, when introducing the character of Gundi, a stunningly beautiful young woman, she writes:

"People seemed to know all they needed to when they took in Gundi’s angelic face. Even her one imperfection, the sliver of a gap between her two front teeth, seemed disarmingly appealing. Gundi had enjoyed the attention when she first started to blossom into a woman, but now, by the age of twenty, she was starting to realize that her beauty didn’t give her any actual power but rather the illusion of it. Fewer and fewer people seemed interested in what she had to say these days; they smiled and nodded as she spoke while creating their own version of who they wanted this beautiful girl to be."

This not only captures the backstory of Gundi, but perfectly encapsulates the society in which she's grown up—one where appearances are far more important than actions, where the collective regards banal superficialities as superior to deeper meanings, and where insistently repeated promises can supersede truth (sound familiar to anyone?).

I'd already chosen this book as my 2022 recommendation when the latest spate of highly promoted hate and bigotry hit the morning news. Naturally, that only made me want to rush to get this blog post out sooner.

Ask for Cradles of the Reich at your favorite bookstore and at your local library. If they don't have it, recommend that they get it! Meanwhile, buy it for you and for someone else—maybe as a Hanukkah, Xmas, or solstice gift.

I wish you all the best for the rest of this year, during whatever holidays you celebrate. I hope we all keep writing and reading and celebrating the incredible richness of humanity and the beauty of our world.