Reality versus Dreams; Sympathy versus Empathy 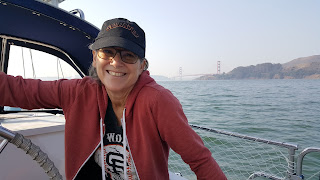 The good news: Yes, I'm really in San Francisco. After years of dreaming of sailing under the Golden Gate, and two months of (slow & fun) sailing north from San Diego, we finally did it. Yay for us!

The bad news: As I jumped down to tie us up in our new slip on day one in SF, my foot caught slightly and I landed on the cement dock wrong. Very wrong. As in, I broke a bone in my knee (I have a non displaced fracture of my tibial plateau, to be exact).

So, dreams versus reality. Reality is me on crutches, hobbling the 300 yards to stand in the shadow of The Ballpark formerly known as AT&T Park, only to hobble home to the boat, exhausted. Wearing my masks of course. One for Covid, one for combating the poor air quality. Did I mention the air quality here has been among the worst in the country for the last two weeks due to wildfires nearby? Oh, and the Giants may not even make it into the playoffs. Reality.

In other news, I am learning just how hard it is to get around in the world with one leg. Getting in and out of cars is a challenge (getting in an out of a v-berth isn't easy either!), but even trickier is opening doors and gates while on crutches. Yes, I can swing along on crutches (for the first 200 yards or so), but, in general, moving around in the modern world with a physical disability is a bitch.

You'd think I would know this already, having taken care of my mom off and on since her stroke in 2011 until she died last year. One of her physical symptoms (she had dementia, so some of her problems were invisible) was a left leg that never quite "behaved" following her stroke. She had pain and neuropathy in that foot and leg for the rest of her life. So, yeah, I knew. I was there—I saw it, experienced it, was inconvenienced by it, and very much sympathized with her frustration. I sympathized.

As much as I tried, it was hard to empathize with her, though I certainly tried to put myself in her shoes. I felt bad for her, but I didn't feel her pain. I was full of life and energy, I could walk so much faster without waiting for her to push along in her walker. I wanted to help, and was happy to assist, and to push her wheelchair once she got one, but I don't think I truly empathized. Boy, do I now.

It is so hard to know you could almost do something, something so simple, but have to ask someone for help. Help with walking, help with tying your shoe, help with getting in a door, putting on a backpack, getting onto your own boat...the list goes on. And it's so great to sit in a shower on the "handicapped" bench and feel the hot water pounding you clean, to have someone bring you fresh fruit from the farmer's market, to lie down after an exhausting bout of doing dishes on one leg,

Oh, yes, Mom, I get it now. Thanks for your patience with my often-poorly-hidden impatience, and I hope my own frustration didn't show itself too often. Hopefully, I will remember how to feel empathy once I am back to being truly bi-pedal. I can see the world is short of empathy right now, both in private and public venues.

What does this have to do with writing? Not much, but some. Words matter. When we write that someone empathized or sympathized, it is important to know the difference. And empathy is the first job of a writer, and an important step to becoming truly human, long before the words fill the pages. Putting yourself in someone else's skin lets you see the world anew. Sometimes that is painful, but it is always revealing.

Speaking of writing, I have read a couple of very fine manuscripts recently, which gives me hope in these dark times. I have also read some amazing published works. Two I highly recommend: The Beekeeper of Aleppo and The Girl with the Louding Voice. Thank you, writers.